How your grandfather would have flown

Did you ever wonder how air travel – the comfortable, fast and affordable luxury most of us take as granted today – would have looked like for our grandfathers and grand-grandfathers?

In the 1920’s, our grandparents witnessed a period of fast industrial and technological development, despite the after-war economical constraints. Like many of us are amazed by the progress of personal computing, the Internet and mobile phone technology, the generation of the 30’s marvelled at motor cars and the improvement of aviation.

The Beginnings of Commercial Flight

As for much of technological advances, World War I had generated the development of better, faster and more secure aircraft, although their primary purpose at the time was fighting. The war also saw the emergence of a series of small airfields around London– with earth or grass fields – whose primary mission was to protect the town from attacks by Zeppelin airships.

After the war there was a surplus of aircraft, and wealthy entrepreneurs founded small airlines to transport mainly businessman and statesmen. But demand for this way of transport was considered risky, and it wasn’t until four of these companies merged into Imperial Airways that civilian aviation really took off. With its stated aim of competing with French, Dutch, Belgian, German and later American companies and reaching locations throughout the British Empire, the company switched from the wood-based biplane airplanes of the 20’s to the faster aluminium-based monoplane that reached up to 200 mph and were easier to maintain.

Airmail – a precursor for many new itineraries

Airplanes started carrying mail since 1911; but it was only after the end of World War I that regular airmail flights were accomplished. In 1930, the Belgian Prosper Cocquyt was the first pilot to bring mail to London in a night flight. Similarly, airplanes carrying mail and newspapers were often the pioneers seeking out new flight routes and trying new plane types. 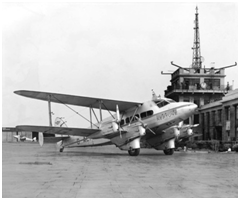 In the early 30’s long-distance flights  to various regions of the British Empire were added, flying passengers to Cairo, the Arabian Gulf, South Africa, India, and Singapore.  In fact, they were really “long-haul”. In 1937, advertisements prised Imperial Airways flights from London to Singapore in “only” 8 days, with 22 scheduled landings – half a World Tour! From Singapore, in 1935 Quantas Empire Airways and Tasmanian Airways relayed travellers to the British Empire’s remotest locations – Australia and New Zealand. To India and South Africa our grandparents could have flown in less than a week, cutting travel time much shorter than the more traditional voyage by railway and ship.

Despite the technical advances in airplane design, the flights were quite bumpy. The cabins were not pressurized until the early 1950’s, so the planes couldn’t fly at high altitudes and were subjected to harsh weather conditions and turbulence.  But the airlines tried to compensate by providing luxury, comfortable seats and even beds. While the flying style brought up a new fashion, it remained expensive and a privilege of the wealthier sections of society. A flight ticket from London to Singapore could be bought for £180 – about 17’600 of today’s dollars if adjusted for inflation. The fare for the longest route available in 1938, from London to Brisbane / Australia -spanning 12’00 miles, corresponded to today’s $20’000. The price covered everything except for alcoholic drinks. Today you would pay 10 times less for a round-trip ticket.  Nevertheless, from 1930 to 1939 close to 50’000 people flew with Imperial Airways.

THE END OF THE GOLDEN AGE OF FLIGHT 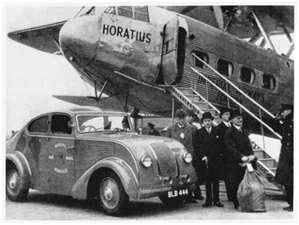 As air travel became widespread, smaller private companies also started their own flight routes – competing with Imperial Airways mainly on European routes. In 1935 they merged into British Airways Corporation, which operated out of the new London Gatwick airport. Both companies were nationalized in 1939 to form British Overseas Airways Corporation – BOAC. Although during the interwar period airborne flight was mainly reserved to a very small section of society, it was the period in which commercial flight witnessed the most astounding technical advances. It greatly reduced the time people needed to reach any part of the World, improved trade and allowed written communication and news to spread, linking all continents of the Globe. Obviously, the start of World War II brought a drastic reduction in passenger flights – and the end of the Golden Age of Flight.

In the 1930’s it wasn’t only the huge improvements of flight that captured the Londoner’s interest; improvements in motor techniques also benefited road vehicles, making them faster and more resistant. Your Grandfather may very well have been fascinated by cars. The new motorised vehicles invaded London’s streets, superseding horse carriages.  In fact, in 1934 nearly 2½ million motor vehicles were registered in Great Britain, roughly half of them being private cars.  Although a speed limit of 30 mph was introduced in built neighbourhoods, it was rarely respected, and 1934 became the year with the most traffic deaths.  7,343 people, mostly pedestrians, died being hit by cars. Compare that to 1,713 traffic deaths in Great Britain in 2011, and the 25 persons only who died from airplane crashes in 1932, although air travel was still considered dangerous.

The cost of a new car in the 30’s was nearly half the price of a flight ticket to Singapore – private vehicles were available for between £100 and £135. But the increase of the number of cars also generated the need for new traffic regulations, and new parking space. In 1934, a driving test was introduced, and traffic lights were installed in London slightly before. The first parking meter was installed in the USA in 1934.

Now you can easily imagine how it would have been like for your grandparents to experience flight in the 30’s, if they had the chance to own a car, park it at the airport, and board an airplane for a far-away location….