With nearly 31 million airline flights worldwide every year, there is a high probability that you have loved ones or friends who take a flight within these days. It will certainly be reassuring to know where they are just now. Thanks to the Internet and the worldwide air traffic tracking infrastructure, now it is possible to track their flight in real time. If they are coming to a London airport, you can drive to it knowing about when they will arrive. Go to the Arrivals, leave your car with the “Meet & Greet” staff who will safely park your vehicle until you are reunited with the people you are expecting. Even before you see that their plane landed at the arrival board, you can know exactly where their position is in the sky.

Plane tracking can become a hobby

Even if you don’t know anybody riding the skies just now, it is interesting and fun to track flights – and it can easily become a passion. You might see an airplane out of your window, or flying over you, and wonder which airline it is belonging to, or where it is coming from. Maybe you like to know the various airplane types, or taking pictures of planes taking off or landing – you might be amazed by the beauty of your photographs. The above picture for instance is a composition of 75 photos taken by U.S. photographer Michael Kelley showing take-offs of planes at Los Angeles International Airport during  8 hours. The picture below was taken of a commercial airplane just before landing. The vortices created by air swirling at its wing tips from the lower side of the wing to the upper side  – which has a lower pressure, may be seen if the plane is crossing colder air. This event is part of the wake turbulence, the agitated air behind a fast-flying aircraft, and it can create amazing and almost surreal views.

Many websites let you share your images with people having similar interests, and you can find new friends among the “flight tracker” community.

How to track airplanes in real time number of a flight – or a date, departure and destination airports, and see if the flight has taken the air, is in mid-flight or has arrived. But it is much more exciting to search for a flight on one of the several websites giving you the opportunity of “live air tracking”.

One of these sites is flightaware.com.
Over a simplified but zoomable World map showing all airports, it shows you the planes flying in real time. Point at them with your mouse and you will see their flight number and details. The site also lets you search by carrier, airport, airplane type etc., and traces a plane’s route. Moreover, there is a large photo page where you can share your pictures with other flight enthusiasts.

Another nice site is planefinder.net/. This site shows a very nice map with physical properties and even roads and airport outlines. Pointing at an airplane shows you the airline logo, flight number, the call sign, altitude and flight speed.  It also lets you search for a flight, carrier, airport or location – and even integrates a “ship finder”, that lets you locate any major commercial and passenger ship. The site retrieves the ADS-B plane and ship data sent by commercial and private planes and ships to transmit their name, position, call sign, status and lots more and adds departure airport, destination and photos for presentation on planefinder.net. A further live flight tracking site, flightradar24.com ,  is also a great site to track flights. You can just zoom into a location or region, or search by flight, plane type, carrier company – to see its whole fleet being in the air just now, see the picture and details of each plane and its route, and much more. 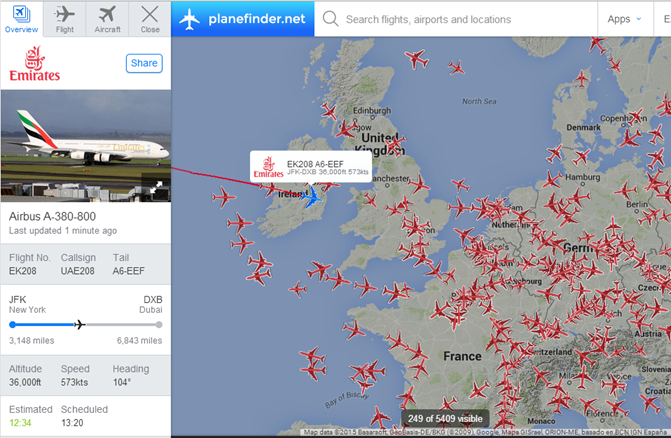 It also offers the possibility to change the World map to satellite map. The information being “real time”, it shows the features specific to our time. For instance, zooming into the Middle East region you can observe that war regions are diligently avoided by commercial aircraft. 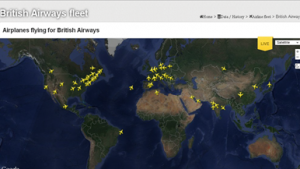 There is only minimal traffic to Iraq, none over Syria and over Yemen, and almost none over Libya. It also shows some politico-economic features: Greece and Egypt, which were major travel destinations, wrongly don’t show a great affluence of airplanes. Despite the news stir about Greece’s economic problems and Egypt’s low-level unrest, 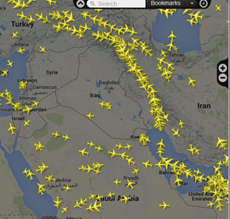 both countries are entirely safe for tourists – and prices are at their very lowest level just now. So travellers should benefit, both of the discounts and of the facts that the countries are not overcrowded with tourists. Turkey, on the other hand, seems to benefit from this situation – a lot of Turkish Airline planes are in the air…

Airplane tracking is really an enjoyable and amusing activity, even if you just do it as a hobby! And very soon you might well drive to a London airport, park your car in one of our safe parkings and take a ride on an aircraft yourself, knowing that other air tracking hobbyists are following your plane’s voyage just now!